Channel 4 has a tradition of shocking TV! The new ident series finishes off with an extraordinary scene!
Click here to listen to Timmy talk about filming the ident!

Harry Hill’s TV Burp is one of Timmy’s favourite shows on ITV.  “It finds the funny stuff on shows that directors hope is missed – we then give it the Harry Hill treatment” says Harry’s Producer, Nick.  This gag involved Emmerdale, some dead sheep and the actors who play the expired farm animals!

Timmy went on Channel 4’s teatime chat show with Richard and Judy to discuss great things about the 80s. Along with comedian Tim Vine, Timmy talked about the 80s being a time of excitement, colour, big ideas and big characters.

“Don’t forget that before the 80s there were only three TV channels. They came on air at teatime and closed down at bedtime! Then along came Breakfast TV, Channel 4 and before long 24 hour TV” said Timmy.

He went onto add: “So many big names got their big breaks in the 1980s, for example Lenny Henry and Tracey Ullman on A Kick up the 80s, Rowan Atkinson on Not the Nine O’Clock News, Rik Mayall on The Young Ones, Robbie Coltrane on The Comic Strip Presents and Harry Enfield.” Timmy was in full flow now…

“Kids TV was brilliant – ‘Wacaday’ and the ‘Wide Awake Club’, pop music was exciting – Duran Duran, Frankie Goes to Hollywood, and Culture Club. We also had big celebrity heroes in the 1980s – Gary Lineker and Ian Botham in sport and of course Princess Diana."

The only good thing about the 90s was of course Timmy’s Number One hit ‘Itsy Bitsy’ in 1990!

Timmy went on ITV’s This Morning with Denise Van Outen and Richard Bacon to talk cheesy pop classics! Dig those specs from one of Timmy’s hit records. But do you know which one?

Timmy went on ITV’s This Morning to talk about the drama on I’m a Celebrity, Get Me Out of Here. In particular how Gillian had smuggled in some bizarre “treats” into camp. Gino admitted to smuggling in 2009 and Timmy commented:

Timmy went on to describe how he had taken the paperbark that the meals were wrapped in, and smuggled it out of the jungle and was using it in a series of artwork about the jungle experience.

It’s Christmas time and panto time. Timmy joined a host of stars to score the Big Fat panto Quiz!  Click below to listen to Timmy chatting with Dan Waite (son of Terry Waite).

In 2003 Timmy appeared on the Children’s TV presenters celebrity version of the dreaded Weakest Link! And yes, Anne Robinson was as awful as she appears on the box!

It was an ordeal – but not for Timmy who made good use of his Mallet!

It Shouldn't Happen to a TV Presenter

In 2000 Timmy appeared on this light hearted look at all the terrible things that can go wrong when you are doing live kids TV!

Timmy says doing the Wide Awake Club and Wacaday was always harder than presenting Newsnight! It was also a whole lot more fun!

“So what goes wrong Timmy?” Ever wondered where Timmy’s catchphrase “Utterly Utterly Brilliant” comes from? It’s Timmy’s thinking phrase when he’s working out what to do! The more utterlys there are, the more he’s trying to remember what comes next!!

“You’ll have this Mallet forever” said the producer! And he was right. Everywhere Timmy goes people always ask him: “Where’s your Mallet and where’s Magic?!”

Magic would come out of his cage on Wacaday and head for the red light on top of the studio camera. You could sometimes see the grey shadow of his tail across the screen!  If Magic took fright he’d fly up into the lights and long after the show had finished Timmy would be in the studio calling up to his cockatiel to come down so we could go home!

GMTV were looking for family entertainment programmes and Timmy suggested they feature things to do at great locations around the UK.

There were some great hilarious moments, as you can imagine whenever Timmy and kids are around! Including the spectacular re-enactment of the Wars of the Roses at Warwick Castle! Running a railway at Didcot, learning to sail, wind surfing, kick boxing, speed cycling, high diving, synchronised swimming, painting on location, and uniquely how to be a DJ on a radio station!

Timmy has presented a number of schools programmes. This was a series asking how do we know what we believe? Do we always have to see things to believe them? It raised a number of difficult questions and dealt with them in an intriguing way for children.

Timmy hosted 3 series of this popular ITV show, from 1989 – 1991, which was based on Timmy's catch phrase. Devised by producer Patrick Titley each series looked at ways to learn how to be utterly brilliant at different skills. Things like lindy hop dancing, unusual musical instruments, cartooning skills, and kite flying. Each show would feature the talents of an expert and by the end of each show Timmy would be a champion (or nearly) too! Funniest moments included building sand castles on Weymouth beach in October and the awful occasion when the expert acrobat knocked herself out on the metal set.

Timmy played the part of children's agony uncle, Uncle Christopher, on the fictitous show – Saturday WOW! Timmy came off worse in a moving scene with 'Wullie' the drummer.

Timmy performed his number one hit, Itsy Bitsy on the Christmas special, and has made several guest appearances including a memorable duet with the boxer Jane Crouch – singing 'Wild Thing!'

Timmy was a guest judge in a regional final of the popular art series. The 30 minute programme aired on Channel 4 in 1999.

Music Box which played great videos all over Europe. They released a record called Back to the Rythym. Favourite moments were interviewing Meat Loaf and doing the Europe wide chart countdown.

A pop show from BBC Manchester's Oxford Road studios. Timmy's job was to set the competition and to step in when the pop act presenters needed help, which was all the time!

Presented a series for ITV Yorkshire on popular books of ghost stories. 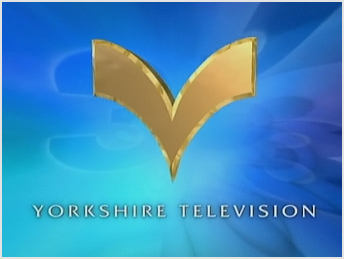 Timmy has presented a number of schools programmes. This was a series asking how do we know what we believe? Do we always have to see things to believe them? It raised a number of difficult questions and dealt with them in an intriguing way for children. 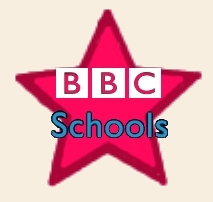 Timmy starred as the host of this promotional roadshow around the UK.

Timmy said making this “was exactly like a Wacaday shoot where you make it up as you go along and everyone comes along to say hi! We didn’t stop laughing all day!”

Timmy's Mediterranean Mayhem Top 50 Summer Hits is a collection of all those great holiday hits enjoyed on summer holidays everywhere! It airs on the Hits and Smash Hits channels and naturally has Timmy's very own Itsy Bitsy Teeny Weeny Yellow Polka Dot Bikini somewhere in the chart! Timmy took off for his 2008 holidays, with a film crew, to the sunny resort of Magaluf in Majorcca. It's Mallett in Majorcca!

It's a crazy opinionated show where the loudest person wins... wonder who that was then?!

Big Brother is back with an all women cast and Timmy is asked to give his verdict on the arrival of heartthrob Ziggy. On the set with guest presenter Chris Moyles and former house mate Aisleyne! That’s haircut boy – ‘Ziggy’ – moments after going into the the house of 11 giggling women!

Watch Timmy expressing his opinions of the other housemates!

Join Timmy as he has a laugh and a good time on Gala TV!

ITV: Call Me A Cabbie

Call me a Cabbie was made for ITV London, it features several apprentice drivers and on this occasion Chantelle, in her new brown hair, driving Timmy around the streets of Mayfair!

Click here to listen to Timmy's podcast where he talks about being a taxi driver himself!

The Match is Sky TV’s big reality TV show and among those taking part this year was football loving Timmy Mallett.

It’s a tough day of 6-a-side try-out matches followed by the bleep test when a bunch of celebrities attempt to run round Bisham Abbey without swearing!

“Timmy, get up front and make a nuisance of yourself!” said the captain.

So he did and Blair McDonough from Neighbours smashed him to the ground not once but twice! (It’s not Aussie rules mate!) It clearly affected our hero whose dramatic shot was saved by Mark Bosnich!

When it came to the selection process Graham Taylor made an unpopular decision he was later to regret when sadly the celebrities failed to win against the Legends!

“That’s football!” said Timmy. “The manager made a decision and the squad had to go on without me! Look what happened to them!”

Some TV shows knock up a cheap prop for the prize, but for Showbiz Blackjack no expense is spared!

Timmy and presenter Lisa Rogers discuss the game of Cat and Mouse on Sky TV’s Vroom Vroom. The object? Just drive the little mouse like car round the car park and avoid the Cat. Sounds easy?!

Harry Hill’s TV Burp is one of Timmy’s favourite shows on ITV.

“It finds the funny stuff on shows that directors hope is missed – we then give it the Harry Hill treatment” says Harry’s Producer, Nick.

This gag involved Emmerdale, some dead sheep and the actors who play the expired farm animals!

Holly said “I once wrote in to ‘Singing in the Shower’ but I never got on…” (all together – AHHHH!) “But now I’ve met the real live Mallett my dream has come true!” Stephen of course starred with Timmy on Timmy Towers. 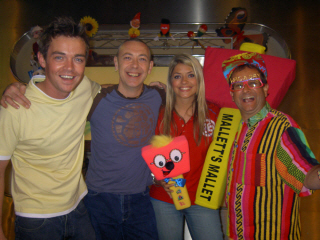 Down in the dungeon Timmy met Scratch the Hyena and action man Ray for some memorable Mallett’s Mallet.

“So, what’s your favourite Saturday morning TV show ever and favourite TV hero of all time?” “Did they get the answer right?” So, what would you have said? 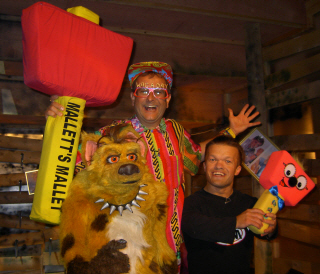