Timmy is a fan of Oxford United and has followed them through thick and thin through promotion, relegation, in triumph and defeat, at Wembley in tears of joy with the Milk Cup and play off victories. 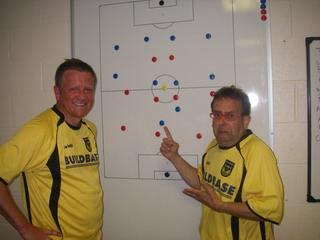 Mark Edwards of the The Oxford Mail wrote “Among other former United stars to turn out were John Byrne, Andy Melville, Paul Powell, Mike Ford and Peter Rhodes-Brown, but the biggest cheer of the night came with the introduction of Timmy Mallett, who was given the privilege of donning his beloved Oxford shirt."

A message from one of Timmy’s fan’s who happened to be present at the game:

Just to say a quick thank you for the time that you spent signing stuff etc at the game yesterday. Of all the celebs on show there was only yourself and Tommy Walsh who actually spent any real time with folk dotted around the pitch. Your legs (and hand) must be aching after that trek around the pitch, so good on you.

Graham Taylor chose not to keep Timmy in the Squad. Was this wise when we saw what happened to the celebrities against the Legends?

Timmy follows Maidenhead United and cheered them to the title while painting their stadium. He also has sponsored a seat in the new main stand.

Click here for details of Timmy's other sporting passions.