Topping the charts around the world is a very special achievement.

Follow the story, with details of Charity Hits, Smash Hits and singles which Timmy has lent his inimitable style.

“Itsy Bitsy Teeny Weeny yellow Polka Dot Bikini" was number one around the world in the summer of 1990. Released under the name of “Bombalurina" (after one of the cats in the stage show CATS) Timmy recorded this after a meeting with Andrew Lloyd Webber, at his house in late May.

Timmy explained before agreeing to sing a demo of the song:

“Normally I just hit people on the head,"

So the following day, (Wednesday May 30th) after appearing live on Wacaday, Timmy turned up at Nigel Wright’s Scratch studios in Chertsey and spent a brilliant afternoon being a pop star!

Andrew Lloyd Webber was delighted and the song went into secret production as Carpet Records first release through Polygram.

Timmy went off on a five week filming trip to Crete, Russia and Norway taking with him a cassette version of the song. In fact the first play of the song was in a nightclub in Malia on Crete where it brought the house down, and the DJ begged to be allowed to keep it.

“You might have a hit on your hands here, Timmy," said the director.

Timmy performing Itsy Bitsy on BBC Top Of The Pops. 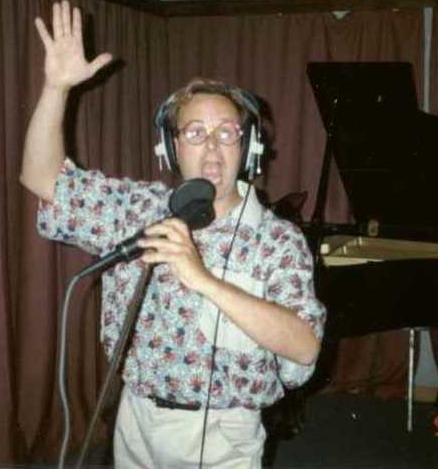 In Mid July the record hit the charts, Princess Diana was photographed in a bikini and the subsequent Sun headline was “Itsy Bitsy Di’s a dream in her bikini!"

That and a front page TV Times did wonders for the record’s promotion. It caught the public mood, was heavily played across Europe and at the end of July Timmy appeared on Top of the Pops as the first act in a then rare live show.

The two Itsy bitsy girls Dawn Andrews and Annie Dunkleywere the best session dancers around and were chosen by the choreographer Arlene Phillips. Madonna’s Vogue was the style for the dance routine and Timmy and the girls spent busy days rehearsing at London’s Pineapple studios. (Dawn was later to marry Take That’s Gary Barlow and Annie appeared as the blonde in the Thelma and Lousie car ads).

The video was shot in a garage in North london were they recreated a fake beach and were made the front cover of Smash Hits. Itsy bitsy entered the charts at 25, up to 13, then to 3 and finally number 1 on August 19th 1990.

Promotions followed on the Radio 1 roadshow, and around the country. The day they hit No.1 Andrew threw a huge party at his Berkshire mansion and they all listened to Bruno Brookes Radio 1 chart rundown. The following morning Chris Evans turned up on Timmy’s doorstep with a bottle of champage at dawn as Timmy was leaving for the Wacaday studio.

The Top of the Pops was a massive celebration. Jealous looks from theHuman League and Beats International couldn’t spoil the moment.

“No one can take away from you the fact you are Number 1," said Duran Duran’s Simon le Bon.

But the best was still to come. On September 8th at Wye in Kent, still top of the charts, Timmy married Lynda Bingham.

“I may be number one," said Timmy, “but it’s nothing compared to being married to the number one girl in the world!"

And the wedding had been planned months before any of the Itsy Bitsy whirlwind had even been thought of. There was a specially recorded version of the chorus done for Timmy’s pantomime song sheet. The Itsy Bitsy songwriter hadn’t died, Timmy talks below about a case of mistaken identity and the trouble it caused.

A call from a showbiz pal led to a great night celebrating Gary and Dawn Barlow’s 10th wedding anniversary.

“Gary called me," said Timmy, “and asked if I’d help him with a night to remember – get Dawn, Annie and me back on stage to recreate the the Top of the Pops dance sensation of the summer of 1990!"

It was the surprise of the night. The show had already seen performances from Jason Donovan, Ronan Keating, Alicia Dixon, Peter Kay, Michael McIntyre, Lulu, and Take That when the finale was the thrilling surprise for Dawn in front of her friends and family.

Timmy and Annie had a quick 10 minute rehearsal with two new Itsy Bitsy girls (Sophie and Sinead) in a secret bathroom, Dawn was given three minutes to refresh the routine without realising Annie and Timmy were going to be there. Then the group were reunited on stage to perform to a thrilled and cheering crowd of celebrity friends and family!

Timmy recalled how special the song had been in all their lives:

“It was number one when Lynda and I married 20 years ago this year," said Timmy. “And how lovely it is to be here at your special 10th anniversary. And here’s a little gift…" as he presented Dawn and Gary with a Pinky Punky Mallet.

“Did it come back to you Dawn?"
“Like it was yesterday," a smiling Dawn replied!

Bombalurina - Seven Little Girls Sitting In The Back Seat

“Seven Little Girls" was the follow up single to Itsy Bitsy, which reached number 13 in the UK charts. The special cadillac glasses were made specially for the video by Anglo American which make all Timmy’s distinctive stage wear specs. The seven little girls all went on to make names for themselves. The video was made by the same company who produced the glorious Itsy Bitsy fake beach.

The song made a big impact on Top of the Pops early in December 1990. On one memorable promotional day at Capital FM Timmy did the breakfast show with Chris Tarrant. “Give us the weather forecast Timmy…" “It’s going to be HOT – around seven little degrees sitting in the back seat!"

Above: “Seven Little Girls Sitting in the Back Seat."