As Patron of the Starmaker Theatre group, Timmy is encouraging youngsters eager to make it on the stage.

Timmy played King Crumble in the Windsor Theatre Royal production of Jack and the Beanstalk in 2016.

It was a pleasure to be in Jack and the Beanstalk again, at this grand old theatre. 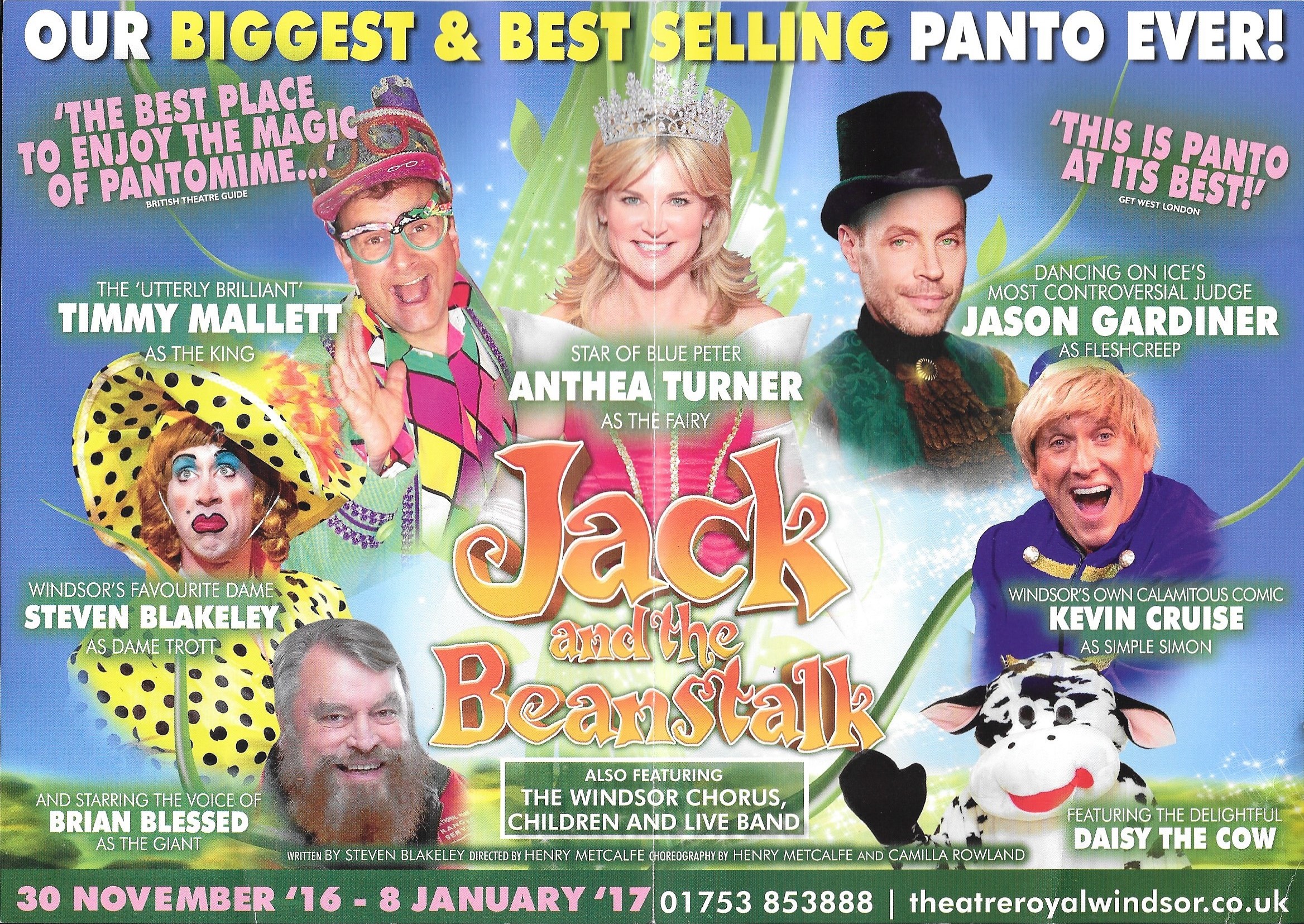 Timmy starred in Peter Pan at the Playhouse, Weston Super Mare 2008-2009! Coming straight to the theatre from the jungle of Australia, this show had it all! See the fun of rehearsing in less than a week; recording Biff Baff Boff backstage, the Christmas Day Dip, and the visits to the show from the stars!

The press came along to the launch during the summer holidays and Timmy and the team judged the pirate themed fancy dress contest!

It was the maddest start to panto ever. Timmy arrived back from the jungle of Australia in the middle of rehearsals with with less than a week til the show opened and had learn his lines, and the scenes and the names of his co-stars all in a few mad days in between filming promotional interviews and press calls!

His comic talents and the way he brilliantly drives the story make Timmy ideal in the lead and comedy roles. But he's always delighted to enjoy other acting roles too. Timmy's public is always important to him and that that's why he ALWAYS signs autographs after every performance! 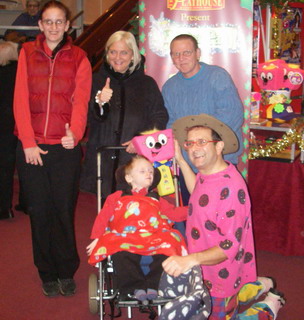 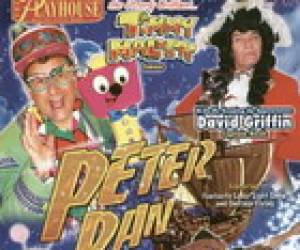 Timmy starred in the panto Sleeping Beauty at the Porthcawl Grand Pavillion 2007-2008.
The show was brilliant and tickets were in such demand it was a record breaking run!

Timmy's panto Dick Whittington at the Worthing Pavillion was a welcome return visit for Timmy. He was last at this theatre during Wacaday when he brought his own Timmy show here on tour.

Among his co stars were CITV diggit's Victoria Higson who celebrated her 19th birthday on the opening night! From the Sooty show Connie Creighton played Fairy Bowbells, a role she has made her own in recent years at Worthing.

Tim Baker was the tallest dame Timmy has ever worked with! 6ft 6" without her high heels…Brian Weston was the ferocious King Rat and Postman Pat made an appearance with his black and white cat, Tommy! Take a look at the photos from the season.

Timmy's panto Cinderella at the Billingham Forum on Teesside was their most successful show EVER only matched by Timmy's Snow White two years before. 26,000 people came to see Timmy with co stars Joanne Knowles from Hollyoaks, Vicky Hawkins (Claire from Byker Grove), Judie McCourt from Tyne Tees and TFM, Andrew Van Buren's magic act andNeville King the wonderful ancient relic from the Black and White Minstrels!

Among the many highlights were Timmy's rendition of I'm a Believer, his hilarious audition for Pop Idol performing Something Stupid; the wonderful lost 50p sketch, when he had the whole audience searching for it! And of course Timmy's giant football kicked around the auditorium!

Timmy To The Rescue

Timmy Mallett saved a woman from drowning in a daring rescue in the early hours of December 30th 2001.

Timmy's wife Lynda was awoken by screams from the woman, Geraldine Holland, who had fallen into the freezing cold Hartlepool Marina after midnight. Whilst Lynda phoned 999, Timmy threw on his usual jumble of odd clothes and raced to find her, leaping over a locked gate and, in darkness, dropped 10ft to the floating pontoon. Timmy found the woman in the water holding on to a boat’s mooring rope. She was feezing but Timmy managed to pull her out and kept her warm by putting his coat around her whilst trying to keep her conscious.

“Timmy saved her. He was very brave."

“She came out suffering from shock and hypothermia. The scary thing is that another few minutes in the water and it might have a been a different story."

Timmy was staying at Hartlepool while he appeared in panto in nearby Billingham.

Ant and Dec's comedy writer Dean Wilkinson gave his comment on the story:

“A woman falls in the marina. 'Help me' she cries. Someone pulls her out – It's Timmy! – 'Throw me back' says the woman!"

Redhead At The Marina

This is Joanne Knowles – Prince Charming – looking glamourous outside Timmy's flat at the Hartlepool Marina. Joanne was Utterly Brilliant when she was in Hollyoaks and she was just as brilliant in panto! 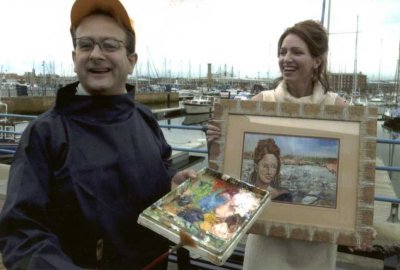 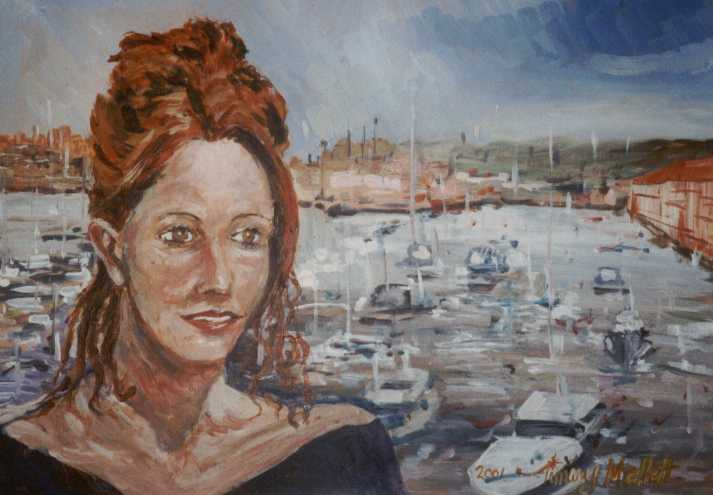 For the 2000/2001 panto season Timmy returned to Lewisham Theatre – the place where he starred in his first pantomime back in 1991. This time around, he was starring in Aladdin.

As usual, there was plenty of mess and plenty of chaos as Timmy caused havoc in the audience when he ran out and squirted them all with water and shaving foam went over everybody!

Timmy has also appeared at the Wyverne Theatre, Swindon.

More than 26,000 people came to see the production of Snow White and the Seven Dwarfs which Timmy starred in over Christmas 1999/2000.

But on one showing there were some rather special visitors! The Prime Minister's wife Cherie Blair together with son Euan, 15, and daughter Kathryn, 11, came to the panto on Wednesday December 29th after Timmy invited them!

“It was great that the Blairs were able to come and see the show and I'm really delighted that they had a good time!" 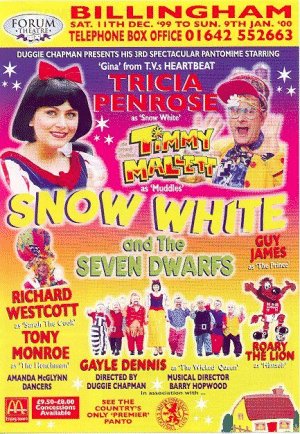 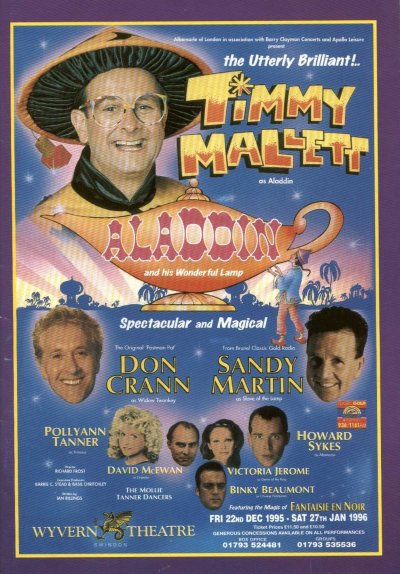 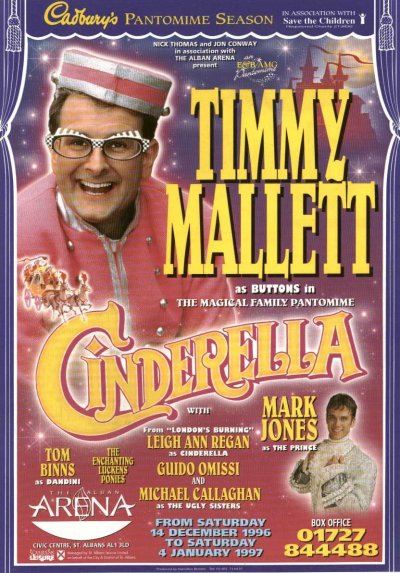 The comedy duo Powys and Jones from Wales were sensational and Howard Sykes as King Rat was very Shakespearan! Local radio breakfast show DJ Mark Collins had the hardest job.

As well as two shows a day at the theatre he was also getting up at 4.30am to do the breakfast show on Northants 96. Phew! exhausting!

“Hi Timmy
I came to the pantomime, it was my birthday, I got pulled up out of the crowd to play Mallett's Mallet!! AND I WON!! After that I got my Timmy book and programme signed. That really did make that birthday one for me to remember. Although it was now years ago I just wanted to say thank you for making that such a great day for me.
Tris" 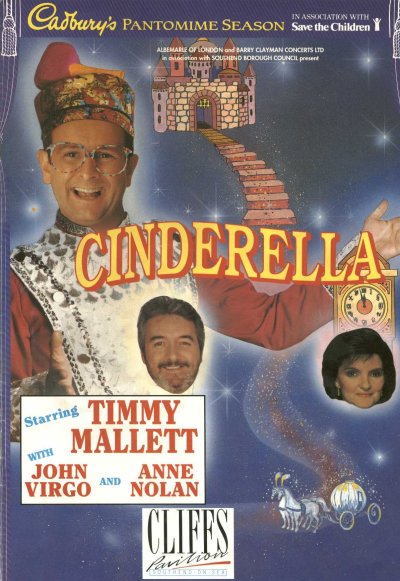 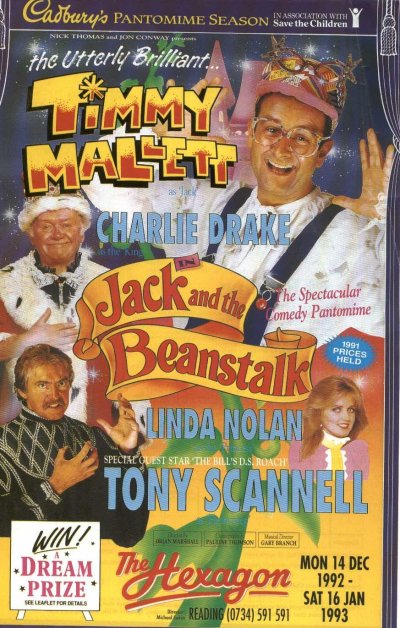 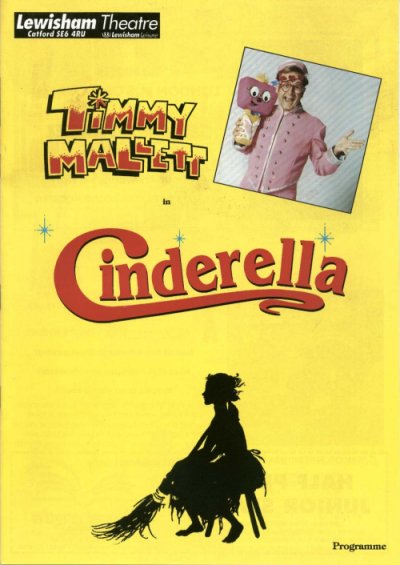 Timmy narrated and acted an amazing version of the classic Peter and the Wolf with a 50 piece orchestra in the unusual setting of the church in High Wycombe!

He caused a stir by climbing onto the pulpit for the dramatic part where Peter catches the wolf and then almost strangled the lead violinist!

The evening was hosted by Timmy's good friend and neighbour, Carol Vorderman. 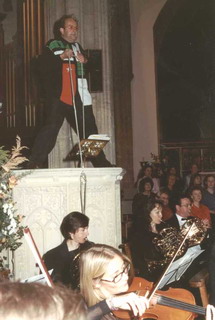 The Biker Mice From Mars Show 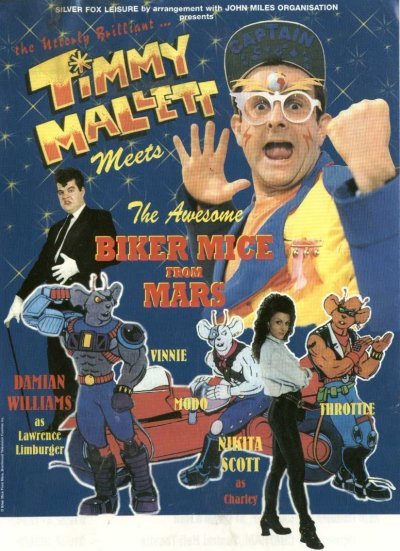 Timmy had a wonderful time during his tours and shows.  He would like to thank everybody who attended and made the shows Utterly Brilliant!

We’d love to hear from those who have enjoyed them! E-mail us here!

Buy a signed copy of any of Timmy's pantomime programmes right here for just £7.99.