It was in October 1984 that the first Wide Awake Club went to air on TVam, hosted by Timmy Mallett, Arabella Warner and James Baker.

2O years on the WAC team were back together again for a reunion party night. Michaela Strachan flew in from Cape Town, Neil Mularkey (the other half of the Sound Asleep club) came to reminisce with Dr Pete, producer Nick Wilson and the rest of the production team.

Everyone brought memories and memorabilia. There were the huge WAC posters, WAC annuals and the WAC books. Everyone was given an original Wide Awake Club badge. (They are like gold dust now.

If you have one. Hold onto it – they are valuable!) Timmy found his original greay Wide Awake Club T shirt and his painted Jacket worn on filming days all those years ago. 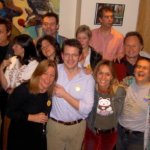 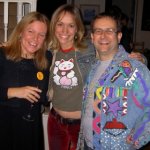 Arabella, Michaela and Timmy – is that a singing in shower jacket?! 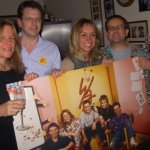 Do we look like our poster?
Oh No! James is still wearing the same shirt! 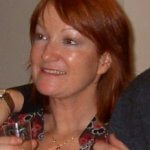 Aisling one of the funniest members of the production team. Ash co-wrote Timmy’s Utterly Brilliant History of the World. Typical of Ash’s WAC gags “What do you do in the dark ages? Turn the lights on!!!"

Michaela did the pilot WAC show with a dance troup called Wacky Feet! She was brilliant and got a job on the presenting team immediately!

Waca-Phil Parsons wrote the Wide Awake Club annuals. He did such a great job, we kept him on to come up with some of the nuttiest ideas on the show!

Gabby and Bolly – best friends still! After Alvin Stardust and WAC, Gabby is now at CBBC and Arabella is a top TV script writer!

Neil Mularkey – the other half of the Sound Asleep duo with Mike Myers! “We only ever did 5 appearances but they have gone down as legendary!"

Hilary – AKA Hat, ran the office and was inspired to go on and become a writer – 36 children’s books so far!!

Natasha loved the Outside broadcasts we did.

Did you ever win a Wac Sac? Or the wonderful yellow Wac Packs?