What was your favourite bit of Wacaday? 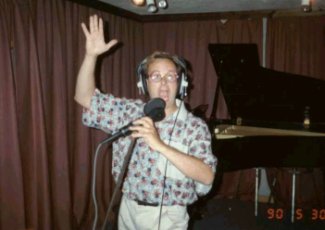 Timmy says:
“I loved all the filming we did around the world. We went to some amazing places and met loads of Timmy’s cousins (who were even more barmy than me!)

I also loved Magic – he was so talented and would always (well, nearly always) come out of the cage when asked – and he never bit me!

I also loved all the messy stuff like the shark infested custard, Mallett’s Mallet and all the rest of it really."

Timmy says:
“You’re right! We had a fabulous time at Llanfair PG – where the station name was longer than the platform – I fell off! Portmerion, Snowdon, Betwsycoed for a strange Welsh legend, I had to run around being King Edward and Owen Wacadower in Carnarvon Castle.

We visited the smallest house in Britain in Conway and I got really grubby being a train driver on the Festiniog Railway! Most of these adventures were in Welsh Wacaday week in October 1988. Well remembered John!"

Did you re-enact the Hills are Alive with the Sound of Muesli? 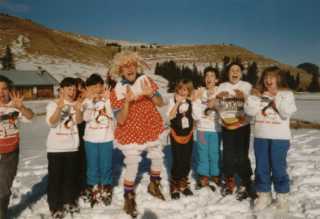 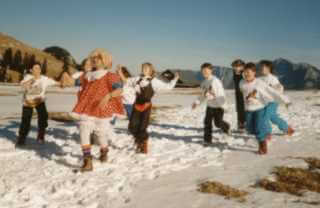 Timmy says:
“Carrie, you’re talking about one of the highlights of our tour of Austria! Running over the mountains in my frilly spotty dress with glorious wig singing “The Hills are Alive with the sound of Muesli! The muesli we have eaten for a squillion years!" This was just the start of a fantastic tribute to our favourite movie.

We laughed and laughed the whole day we filmed this – I still burst out laughing when I recall it – an absolute gem of utter Wacaday Nonsense!"

When did Michaela Strachan join the Wide Awake Club? 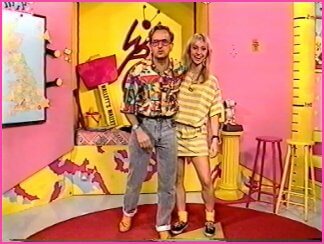 Timmy says:
“Michaela was on the very first Wide Awake Club in 1984 as part of the dance troupe Wacky Feet!

She went on to become part of the presenting team in 1985; and her favourite part of the show was the fun Heroes and heroines villans and villainesses!

Oh and the great time we had when she did “Its my party and I’ll cry if I want to!" There’s a picture of Michaela and I on Wacaday in 1987 on the left."

I might be going mad, but didn't Mike Myers sometimes appear on Wacaday? Other people I've asked sort of remember this too? Is it true?! 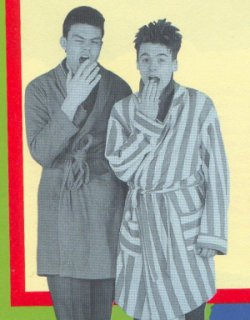 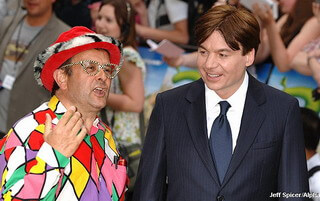 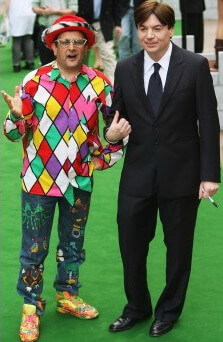 You can hear Neil’s recollection of the Sound Asleep Club at the Wacaday Reunion area of this site. There’s a picture of the two of them above in the 1987 Wacaday annual."

I seem to remember an episode of wacaday where you went to the temple thingy from Indiana Jones and the last crusade (the one thats carved into a rock face), since then I`ve always wondered what was actually inside it? 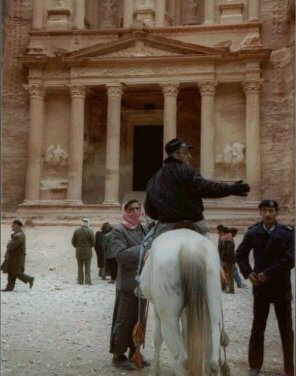 Timmy says:
“Dear James, What you remember is one of my favourite stories from Wacaday. It was ‘Timdiana Jones and the Fourth Wise Man!’

The story went like this – Timdiana Jones was on the last-but-one crusade in search of the little known but equally clever fourth wise man. He found a clue in the dead sea cheese roll and leaped aboard the fastest mode of transport in the desert – a horse.

He galloped off down the secret souk to the lost city of Petra (the rose red city half as old as time) and came out in front of the most gi-normous temple (just as in the movie).

At that point he faced his deadly rival from the Nasty party who he finally defeated with the mallet and discovered the fourth wise man (who looked remarkably like me) hiding in the temple.

Leaning forward he asked what was his gift to the baby Jesus after the gold, frankincense and bleugh????" It was a lollipop and a souvenir T shirt, and Timdiana bonked him on the head for being so daft.

Petra is in Jordan, a wonderful magical place and the temple is a real ancient temple squillions of years old that was only rediscovered in the last century. The temple is carved into the rockface, and various silly adventuruers have taken pot shots at it in the hope that there is buried treasure in the carvings.

On the day we filmed in December 1989 it was bitterly cold, and the horse was uncontrollable; at one stage it galloped off up a cliff face with me hanging on for dear life! Ludo Graham was the director and played Fritz Hamburger from the really Nasty party (incidently his secret weapon was a telescoping umbrella!)"

I just loved your remake of Itsi Bitsi teeny weeny yellow polka dot bikini. What was it like in a recording studio? Did it take ages to make? Was it difficult going from TV to Music? I still have the tape of it at home, and stick it on when ever I need an uplift. You are an amazing guy - keep doing what you're good at. 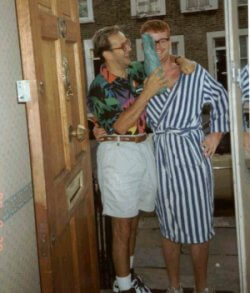 Timmy says:
“Dear Laura,
I’m so glad you like Itsy Bitsy. So do I. The studio we recorded in is called Skratch records in Chertsey, the home of Nigel Wright who’s a big pop producer and has had nearly as many number 1 hits as heads I’ve bashed!

We actually recorded the song during 1 day in May 1990. Because I’m not a trained singer(?!!) he got me to sing it bit by bit, and work on each bit as we go.

The best part was doing the Oh yeahs! Here’s the photo to prove it!"

Was there ever a Waca-tartan Army?

Timmy says:
“Yes there was Stevie. A group called the Clan were featured when we filmed at Dundee!"

What was written on the "wacky plaster" that was stuck on the loser of Mallet's Mallet? 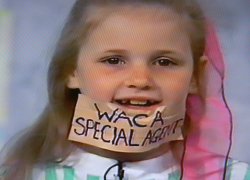 Timmy says:
“Aah the wacky plasters, players had to waggle this at the audience – this is one of the questions I get asked loads, but it’s a really easier one to answer! They were Wacky Plasters so they said ‘WAC’ of course!"

Thanks to my young colleague Kristie (25) who started talking about Wac-a-waves during our dull Friday morning in Marketing we started to reminisce. What's your Australian catch phrase (when you were on your tours I believe and staying in a town with an odd name?) 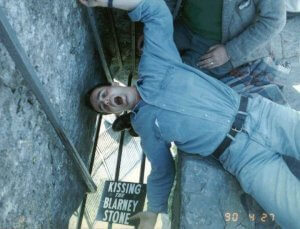 Timmy says:
“You’ve got a good memory Neil. The Blarney Stone is of course the famous stone at the top of Blarney castle near Cork.

The kissing procedure is very precise and dead scary. You have to lie on your back, and lean backwards to kiss this thing upside down, on the outside parapet.

All you can see is the ground way below. It’s supposed to bring you luck, but of course you aren’t supposed to tell anyone what the good luck is that it brought you! In the studio we had our very own Blaaaar ney stone that was a lot easier to kiss, Magic of course bit it! Above is a photo of Anthony Wood the cameraman going for his bit of Wacaluck!"

Throughout the impressive run of Wacaday, Magic frequently sat on the top of the camera, and trail his tail down in front of the lenses. Was this part of the proceedings for Wacaday (like, Magic was trained to do it way before rehearsals), or was Magic on the camera by his own instincts?

Timmy says:
“Magic is a very special cockatiel, and much as I’d like to take credit for training him to fly to the top of the camera I can’t!

I think he just liked the red light and would sit up there with his grey tail hanging down. The cameramen were certainly a bit nervous and I’d see their heads poking round asking where’s he going to land next!!?

Sometimes, they’d try and wave him off and it always made us laugh. Here we are trying to do a show and Magic’s got his own ideas about where he wants to sit!"

Was Jason Donovan ever on Wacaday and what did he do?

Timmy says:
“Yes he was Toby! Jason came on and played Mallett’s Mallet with Timmy and the kids. But his highlight was meeting Magic the cockatiel!"

Did you ever play James Bond on Wacaday? I think you should be the next 007!

Timmy says:
“Of course! Timmy Bond – the man with the golden Mallet! It was during the WacAsia tour when we were in Thailand that we visited the location for the Man with the Golden Gun.

The team set out on one of the long narrow boats to the bay of islands. We thought that one of these islands looked like an upside down jelly, so I dreamed up a baddie called jellyfinger. This lead to the classic Wacaday line “Come on out Jellyfinger! Me and the mallet have got you surrounded!" We had to show the hotel chef how to make jelly from a packet and stick it in the fridge!

It was funny filming the fight with the mallet and jellyfinger on the island – the jellies had been in a cool box and were melting into a mush! The crew adored chucking everything they could find at Timmy! Mike Myers liked the idea so much you might find elements of it in the Austin Powers series."

I seem to remember (amongst other things) you buying a magic carpet while on your travels. Do you still have it and did it work?

Timmy says:
“Well remembered Helen! The magic carpet came from morocco, and I used it to travel all around Marakesh – the square of death, the pink walled city, the Atlas Mountians etc. It’s a lovely carpet, and at one stage on our adventures it ran out of magic! Well you’ll be pleased to know, I still have it; and it still works!"

What was the name of your donkey or horse that used to appear on the show? We know that a catchphrase used for him/her was "eeyore, eeyore, he always reads your letters" but apart from that we're stuck. It's bugging a whole load of twenty-somethings in Southampton!!! 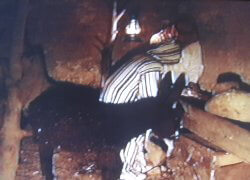 Incidently, Blackie was a real donkey in Spain that the tabloids adopted, except he became a whole lot more famous on Wacaday!"

I was a massive fan of Wacaday for the last few years it was running and when I look back it is one of the happiest memories of my childhood. I seem to remember you doing a section in one of the series called "Back to the USSR" but this isn't shown on any of the sites, so what happened? Well anyway, thanks for keeping me thoroughly entertained throughout the 80's and early 90's - no shows these days could ever match Wacaday or TVAM!

Timmy says:
“Dear Sarah, Wac to the USSR was the thing you are thinking of and it was the name of Magic’s cartoon when we were in Russia, russin’ around the Red Square (remember you couldn’t watch the show unless you had your red square sitting beside you on the sofa?) And the Gremlin in the Kremlin who beat the invading Tartars with Tartar control toothpaste?!" 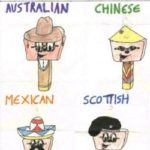 This is a brilliant picture of Pinky Punky’s from around the world – but there’s no name on it!
Did you draw it? Get in touch and let us know! 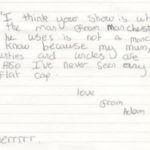 This month’s letter is a complaint (!) sent in during the series when the Man from Manchester appeared. He was played by Mike Brosnan from TV-am children’s programme Top Banana – and he’s really an Australian – that’s why his accent wasn’t right, Adam!

Magic looks after all the Wac-A-Mail that has been sent in over the years. Here’s just some of the best! Squillions of Wideawakers sent in their Wacsnaps to Wacaday…are any of them you?!

Send in your Wacsnaps – old or new.  You can e-mail them to wacsnaps@wacaday.co.uk or post them to:
Wacaday, PO Box 100, Cookham, SL6 9XX.