Wedding day greetings from the way of St James
Why do you wear a tie cycling?

It sounds like a military figure – the vicar general – turns out he’s the Archbishop’s fixer.

It was a pleasure to spend an hour with Jean Paul Russeil at the Archbishop’s palace in Poitiers.  We talked of St Hillary, and his pal Saint Martin, the confessional visit that led to the building of Sacré-Cœur in Montmartre and he signed my pannier.

Turns out there are 15 Archbishop’s in France which sounds like overkill when we are quite happy with two.  It was fun to test him on where they all were and naturally there were several that he couldn’t remember.  Well would you remember Besancon?  Me neither!

He joins the French President and prime minister in supporting my efforts through France on the Camino.  Can’t have too much support… 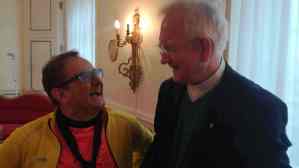 Wedding day greetings from the way of St James
Why do you wear a tie cycling?
Share this Post